We know Spring is really close when the Pedder Bay RV Resort opens for the year. We spent the weekend there with the Reaville's and did a little Geocaching in the hills around the area on Friday morning.

It also meant Robyn and I got to head out into the bay a couple of times and play a bit with some loaner Greenland paddles (GP). For Robyn, it was her first experience with a GP so she used a Joe O Paddles cedar and I used a Northern Light carbon version.

I really had no idea how Robyn would respond to using GP but it sure didn't take long before she was commenting how easy it was to be paddling with a "twig" compared to her euro paddle. That is probably the same thought that many paddlers experience when they first try a GP because from a visual standpoint they just don't look like they are designed to provide effective propulsion for a kayak. In fact after using one now for a couple of short paddles they are very effective and noticeably easier to maintain a constant paddling speed. Of course there are some subtle differences when using a GP for things like bracing, turning and sculling but it doesn't take long to adapt to using the full length of the paddle blades.


We headed out to the crabbing grounds to drop our little kayak crab trap in hope that we would be having fresh Dungeness with our steak on Saturday night. After our deployment we crossed the bay and practiced a bit with the GP's in a little cove that has a narrow gap between a couple of islets. Here we practiced aggressive edge turns while we shot through the gap at almost full speed. 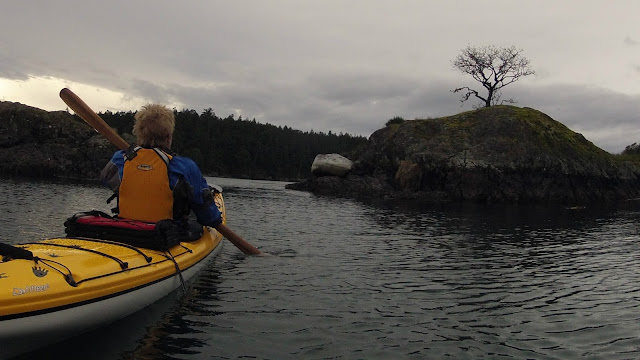 On our way back to camp we paddled by the Lester B. Pearson College of the Pacific which is home to the 2013 Pacific Paddling Symposium at the end of May. The college is an amazing facility and being so close to such diverse sea conditions it should serve the attending kayakers very well. We have booked our usual RV site at Pedder Bay RV Resort so we will be making the 5 minute commute by water. :-)

Back at camp the Reaville's fired up their Margaritaville machine and the rest of the evening soon became a blur ..... for everyone! That is one bad machine ;-)

On Saturday morning I checked the weather forecast and it didn't look good. Predicted gale force winds around noon meant Robyn and I had to get out to our crab trap early to see what bounty might be. We used the Greenland paddles again and headed out with cobwebs floating in between our ears (BAD Margaritaville machine). Checking the trap we found only a single under size Red Rock crab that didn't want to let go of the crab trap. Remember the thought about fresh Dungeness crab for dinner? Well it did happen but we bought it from Jock's Dock instead! 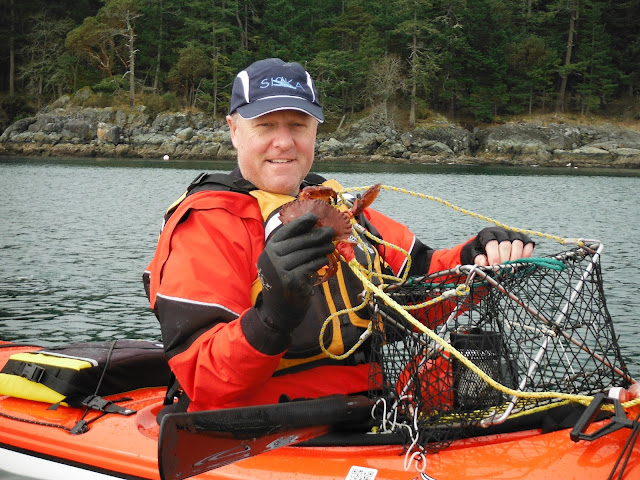 Right on schedule at high noon the westerly gale force winds came ripping trough the valley between the Sooke Basin and Pedder Bay. Robyn and I were just coming past the college back to camp when the winds hit us head on. The water in the bay quickly rose to white caps with sea spray soaking us pretty good but we both commented how well the Greenland paddles performed in those condition.


Back at camp I was surprised when Robyn said that she would like to get a Greenland. Talk about a quick convert over to the dark side or is that right side?? Time to get sized for a couple I say!  :-)