Now It's Time To Put It All Together

“Ble, Ble, Ble, That’s All Folks!” and now it's down to doing it for real. We finished our last practice session today at Willows Beach before heading to the Deer Group on Thursday morning to test our skill set on a Paddle Canada Level 3 course with Cowichan Bay Kayaks.

The last time I felt like this was when I was flying radio control precision aerobatics and heading to fly for Canada at the world championships. Anticipation, anxiety and excitement with just a tiny bit of nerves to just get it done. We can only hope that all the paddles, kayak camping trips and hours of practice that we have put in over the past 3 years have paid off for what lies ahead this week.


We are both feeling pretty good about our skills with only the rolling elements being of minor concern. Either we will have it or we won't but one thing for sure is that over the 5 day course we sure are going to try and make sure it works. It doesn't matter how the roll looks as long as we get out of the water. Easy right?

This will be our last post until we return and thanks to all of you for reading our adventures up to this point. We are sure that the next post(s) about the course will be worth reading until then .....

The Ups And Downs Of Practice

Heading into the final week before we take our Paddle Canada Level 3 course we were back on the water last weekend working on a few skills that up to now have been going pretty good. On Saturday we needed to find an alternative practice area as the beach at Cadboro Bay was closed due to an outflow contamination issue from last week's rainstorm.

Checking the tides for other options we chose Ardwell Bay in Sidney and were on the water later in the afternoon when the tide was higher. With the incoming tide the bay had a lot of seaweed on the surface but at least it was easy to access the beach and a place we could get wet.

Maybe it was a combination of a big walk in the morning, shopping at the Ocean River Event of Adventures or the heat from an unusual hot September day but one thing for sure .... we were sooo off today! I won't go too much into want went wrong but the short video clip below sums it all up.

On Sunday we thought maybe a change of scenery would do the trick so we chose Willows Beach in Oak Bay as our training area. We arrived early before the sun worshipers started to claim their piece of sand real estate for the day and focused on some self rescue skills. Having never launched at Willows Beach before we were pleasantly surprised about the ease of finding a parking spot and felt the access to the water was much better than our regular training area at Cadboro Bay.


One thing that we didn't expect was how clear and cold the water was compared to Cadboro Bay which is due to the water movement through Baynes Channel. This was a good thing as it probably better suits the conditions that we will be paddling in at the Deer Group for the course. We spent more time on our rolls which were much better than the day before and over all we were IN the water more than out of the water.


Only one more weekend to work on skills and a bunch of homework to complete before we leave next week on our next adventure. Naturally we are excited about the course but the anxiety and unknowns of being assessed are starting to creep in. If anything, it should make for a great blog post!

Posted by What's That Birders at 7:27 PM No comments:

I love my girl Robyn! It rained pretty hard all day in Victoria on Tuesday, in fact it was a record setting rainfall for September 2nd. I hummed and hawed all day about going out to practice rolling but when the sun came out briefly Robyn said "Let's go".

Arriving at Gyro Park in Cadboro Bay there was just us and a few other crazy kayakers heading out on the water to practice skills. Sure enough just as we were leaving the shore it started to sprinkle ... HA!

Our goal for today's practice session was fix some roll elements and the weather was just a minor distraction especially when the bolt of lightning and thunder got our attention fast! Thankfully it was the only "BOOM" we experienced and we went about our completing our goals.

Robyn took the lead and completed 3 successful rolls on her own while I stood in the water next to her "hands off" as she put it all together. SWEEEET!

I then practiced several non set up rolls on both sides and although I failed a few on the first attempt I reset up and completed the roll. Mission accomplished for both of us!

On the way back to the put in we practiced some towing skills to finish off our practice session. An awesome evening paddle in just a shower. :-)

Posted by What's That Birders at 6:27 PM No comments:

A Tale Out Of Two Bays

After mentioning to Gary Jacek that I got my new Lendal Rebel paddle from Cowichan Bay Kayaks, he wanted to head up there on Saturday to check them out for himself. We were in for going there too as it would give us a chance to work on some skills while I christened the Rebel on a paddle to Genoa Bay for lunch.

I have found that when working on skills getting wet before hand somehow takes away the psychological block of wanting to stay dry once I'm in my kayak. Solution? Wade into the water to burp my dry suit or in this case just jump off the dock and then deflate the suit. 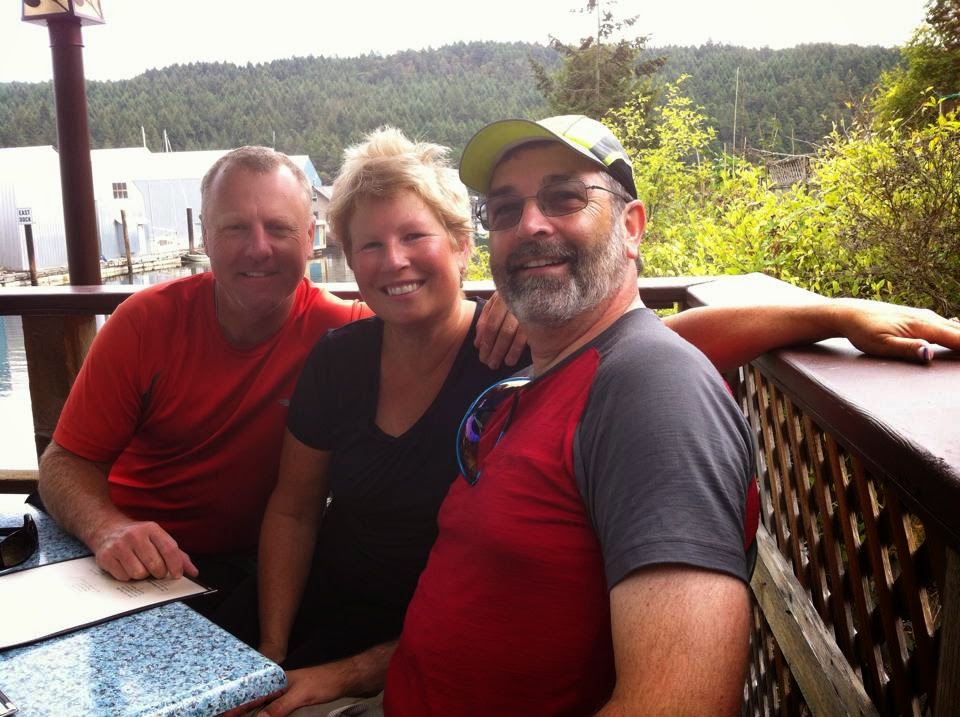 We headed out across the bay and spotted the osprey's and seals that are popular on the CBK Wildlife Tours and then made our way to the Genoa Bay Cafe for lunch.

Just as we were sitting down to eat the rain started and we were the only customers who stayed outside under the partial protection of the patio umbrella. The waitresses must have thought we were nuts until they heard that we kayaked in so for us, water ..... what water? LOL

After lunch we paddled around inside the bay exploring the shoreline and some of the interesting inhabitants. One might think that these dwellings were nothing more than derelicts but on closer inspection they showed some signs of life.

We headed back across Cowichan Bay to allow Robyn to work on some rolls just outside the Oceanfront Suites where we were caught on their webcam.

Actually I knew where the camera was so we sort of planned to photo bomb ourselves into the picture. By the looks of things there was a wedding that was going to take place outside as well but the weather had different ideas. Checking the webcam later it was moved indoors. :-)


Not long after Robyn started working on her rolls a torrential downpour came into the bay so we started to head to the CBK dock where of course the sun came out. It figures :-) Dave Nichols met us on the dock and he managed to get me to try a P&H Aries on loan from Mark Hunt at MEC in Vancouver. The Aries is the composite version of the P&H Delphin that both Robyn and I have and I found it to be as responsive but a little quicker than the Delphin. One thing for sure .... it sure is a "blingy" kayak!


The only thing that I didn't like about the kayak was the positioning of the fixed thigh braces on the cockpit combing. I found them to be too far back towards my hips and as a result they hurt my thighs when I edged the kayak. As a note, Robyn and I went to MEC Victoria on Monday and saw a new P&H Aries and it had the same adjustable thigh braces that our Delphins have.

Tomorrow would be another day on the water with Gary but his wife Jane would be joining us on a paddle from another bay closer to home. 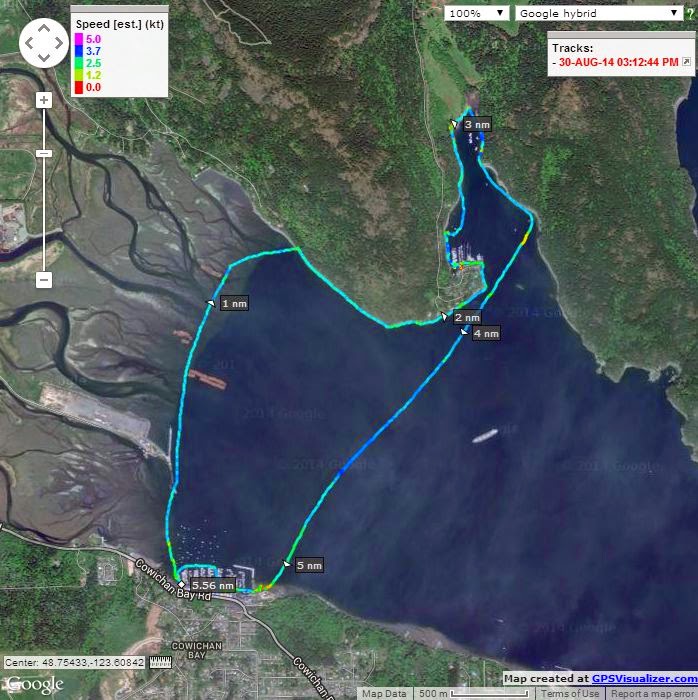 They don't exist in these waters anymore .....yeah right! It seems that a friendly sea otter has migrated to the south coast and has been hanging around Cadboro Bay for the past couple of weeks.

We had the pleasure of it coming to check us out at Cadboro Point while on a paddle with Gary and Jane Jacek to Discovery Island. The unfortunate thing about this sea otter is that it is way too friendly and was trying to climb onto our kayaks.


From our encounters with sea otters on our recent west coast trip we found them to be curious but they sure didn't want climb onto our kayaks. We figured that this little fella must be rehabilitated as he showed no signs of fearing contact with humans.

Continuing on our paddle we crossed Baynes Channel and made our way into the Chatham Islands to explore a little bit. This was Jane's first trip over to these amazing islands and so far she was getting her money's worth on this wildlife tour. We met Mike Jackson, George and Dan who were out on a paddle and I told them about the sea otter encounter. On the way back to Cadboro Bay the sea otter found them and it climbed onto Mike's kayak. You can check out his encounter here.


We headed to the Discovery Island Marine Park which would be our lunch stop on the trip. Being a long weekend we fully expected to see the place packed with tents and power boats but to our surprise there wasn't anyone there.......

Except for a very large family of Asian campers that had just arrived by powerboat. By the looks of all the gear they were bringing ashore it looked like they were planning on staying a while.


The Ocean River Discover Tour was also at the park and we watched them head off on their paddle while we finished our lunch. It was one of those times (again) where it would have been nice just to set up camp and stay the night but who would have thought that the place would be deserted?


It was time to head back to Cadboro Bay and our crossing of Baynes Channel had a little excitement for Jane to experience in the form of a few tide rips that were generated from the wind against current that was happening.  Making our way back through the little channel at Flower Island we saw a deer swimming across to the point. Another planned part of our wildlife tour for Jane to experience. Tip Please! LOL Posted by What's That Birders at 5:52 PM No comments: