All winter I've been wanting to go back to Port Renfrew and do some rock gardening and since Kari was in town on vacation I sent out an email to a few friends throughout the week before. The plan was simple, meet up at the Pacheedaht Campground located near the Gordon River and to be on the water by 10:00am. The rest was up to each person to have fun in their own way.

The forecast was just about perfect for last Sunday with a mix of cloud but mostly sun, around 8 degrees C, 5-10 kt cross-off winds, surf waves of just over 1 meter and not much swell energy coming from offshore. High tide was just after lunch which has its pros and cons in terms of playing in the rocks or surfing a bit at beachfront. Every day at Port Renfrew is always different so you take what it gives you to play with. That's one of the things that brings you back here and of course it's a beautiful place to paddle.

The great thing about Port Renfrew is that there are lots of on-line resources to plan a paddle and commit to it before making the 2 hour drive from Victoria or Nanaimo. Using a combination of forecasting tools from Environment Canada Marine Weather, Sailflow and the popular Port Renfrew Surf Forecast, paddling at Port Renfrew has a lot to offer for all levels of sea kayakers.

Today was a prime example as there wasn't much swell energy but just enough for those who wanted to venture deep into the rocks or through the many sea arches. For those who simply wanted to have a relaxing paddle along the shoreline while watching those in the "soup" this was also possible.

While the sightseers broke off and headed further up towards Thrasher Rock a small group of 6 of us took on almost every rock feature or sea arch on the way out. Some of the arches we just a little "iffy" due to a combination wave energy and head clearance but we managed to get through those on the way back as the tide started to drop.

One sea arch in particular only had a couple of feet of head clearance when the water receded out but when a set of swells arrived the arch was completely engulfed by wall of water. It was all timing and a little bit of luck but our small adventurous group of 6 each made it through. 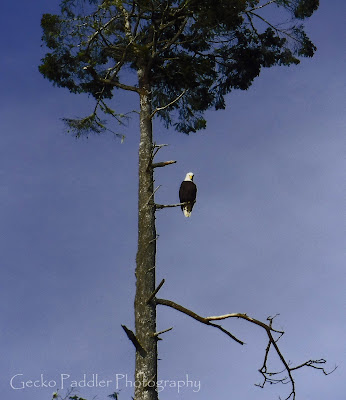 The beauty of the area is magical and on this late January day with the warm sun shining on the NW side of the Port Renfrew inlet it seemed more like a late March or April paddle.

I took the time to look around when I wasn't playing in the features as there were many bald and juvenile eagles, mink, seals and other water fowl to look at.


The higher tide made finding a suitable spot to stop for lunch a little harder but we did spot this location just beyond the Thrasher Cove site. This location also gave the group an opportunity to practice our surf landings and launches. :-)


After lunch we went back to playing in the rocks or anything that was generating some sort of action. Personally for me I think this might have been my best "play day" since I started kayaking. It was nice to hear comments from kayakers that I look up like Gerhardt, Walter, Yves and Patty of Go Kayak as they noticed my progression of skills in handling the tougher situations. :) Thanks guys!!


Of course just the simple task of getting out of my kayak back at the beach bust that "pat myself on the back" bubble. LOL


It's was Kari's first time paddling at Port Renfrew and yes she swam in the rocks and managed to get back into her kayak with a little help from some friends. That's why you go to Port Renfrew with friends of all skill levels. ;-)

She even rolled back at the beach in the cold river water and as a proud coach I had to do likewise. Holy head freeze Batman!!! 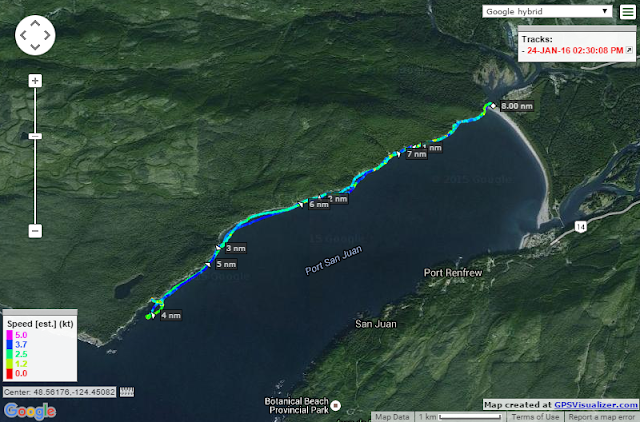 Out Of The Darkness

Friday paddles .... I'm starting to love them! Last week's paddle was a little different in terms of when we decided to launch. Simply put ... it was DARK!

Fellow SISKA paddler John Minkley put together a plan to head to Discovery Island from Gyro Park (Cadboro Bay) and watch the sun rise on the way there. So our little group of 7 paddlers arrived at the park in the dark, unloaded our gear in the dark and headed out on the water at 7:30am .... in the dark. Don't worry we all had headlamps or lights on our kayaks just in case the sun didn't come up today. :-)


The forecast for that day called for variable 5-15 SE (Haro) 10-20 SW (Juan de Fuca East) with a chance of showers. But Discovery Island is right at the intersection of Haro and Juan de Fuca Straights and depending how you interpreted the information it really could mean anything was coming. Oh yeah ... we were also coming up to a max ebb in Baynes Channel of around 3 kts from a NE direction just after launch. So with all of this information at hand we decided that we wouldn't make a direct SE route to Discovery Island but instead head SW to Cattle Point to see what the wind was doing out in open water. Maybe there would be an option to cross over to the Chain Islands first on our way to Discovery Island.


I think we were only about 1/4 mile from the beach when we felt the increasing SW wind and then the rain came. By the time we reached Cattle Point our faces were absorbing the stinging sensation one gets when the rain falls horizontally and you are paddling into it. Our group tucked in behind Cattle Point to get out of the wind and we made the decision to follow the shoreline along Willows Beach and through the Oak Bay Marina where we would assess the conditions again. 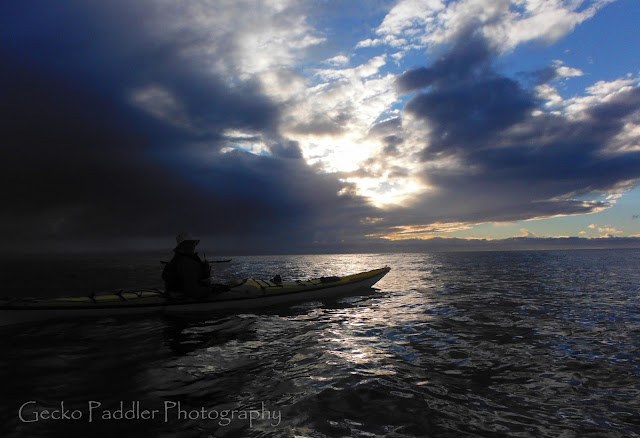 Thankfully by the time we reached the marina the rain had stopped and the skies started to lighten up a bit and before you knew it, there was the sun! Leaving the marina I looked back at the Chain Islands and could see nothing but pretty big white caps in Plumper Passage. Just over 2 miles away, Baynes Channel was showing the effects of wind against current and even from this distance I could see huge white caps. The weather and currents had helped us make our decision so we just kept on paddling towards Gonzales Point.


By the time we reached Gonzales we were in full sunshine but once we rounded the point we were greeted by fairly strong SW winds. After a quick discussion we decided that we would start heading back towards the marina instead of slogging through the wind. Even though our original paddle plan didn't happen that day we still enjoyed the paddle as it was one of those that gave you a little bit of everything ... even a rainbow!


We landed back at Gyro Park Beach, packed up our gear, headed for coffee at Olive Olio's and were all done just after noon. Lots of time in the day to still do whatever we pleased so Kari and I met Robyn at home and we went geocaching along the Lochside Trail. Early morning paddles certainly do have their advantages .... even if they start in the dark!  LOL 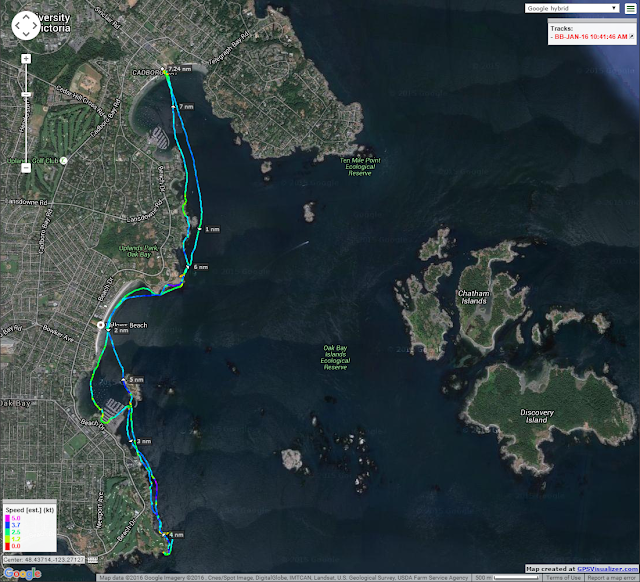 Our first paddle of 2016 (well mine) was joining 5 other South Island Sea Kayaking Association (SISKA) members on the first organized Friday paddle that took place on Jan 15th. Typically the club has organized paddles on the weekends but from a recent survey many members indicated that they would like to see paddles on Tuesdays or Fridays as well. Having Friday's off has its benefits, one of which is being able to get out on the water while all working folk (right Robyn) can't enjoy it. LOL

Classed as an Energizer Paddle due to the pace and distance, our small group launched out of the beach at the Esquimalt Lagoon at 10:00am and headed towards the breakwater at Ogden Point. Having recently become interested in 'birding" I found the paddle to be a wonderful opportunity to identify the species that I have learned about over the past few weeks. I must say it added another element to kayaking which in the past I just simply ignored. I found it relatively easy to identify 12 different species including the male and females.

Our original plan was to land on a small beach next to the Ogden Point breakwater and have lunch but with the conditions being relatively calm we decided to press on and found a small secluded beach along Dallas road. After lunch we took our time retracing our route while being gently assisted by an ebb tide. The forecast for later in the afternoon was calling for the winds to increase from the SE and we hoped that maybe we would be able to get a few wind driven waves to play on. As it turns out the winds didn't arrive until well after we were off the water.

Still, it was great to get out on the water and participate in the first SISKA Friday paddle. We arrived back at the lagoon at around 1:00pm and we started hatching a plan for the next Friday paddle with the thought of launching in the dark to watch the sun come up. But that ... will be another blog post. :-)

Posted by What's That Birders at 7:28 AM No comments: