It was a good thing that we decided not to head to Portland Island on Thursday evening as mid summer wind storm hit south coast that night.  Instead we decided to get up early on Friday morning and paddle over to Portland Island for our first cup of coffee. The wind had subsided overnight and the glorious sunshine was once again bringing warmth and calm conditions for to us. Since we were getting an early start to the day we took a chance and drove to the Swartz Bay government dock in hopes of finding a parking spot. To our surprise there were several empty spots available which meant that our paddle to Portland Island would be shortened by about half an hour.


Launching just after 9:00am we were able to take advantage of the turn to flood that would carry us all the way to Arbutus Point on the north end of Portland Island. Leaving from Swartz Bay really cuts the transit time down as we landed just after 10:30am after a leisurely paddle with little wind.


Approaching Arbutus Point it looked like our campground was completely empty until we landed and started to explore the upland where we found Philip Torrens who was just finishing breakfast. Philip arrived the evening before under sail and told us that the wind wasn't that bad at this location on Haro Straight. It turns out that the highest winds missed the tip of the Saanich Peninsula and we could have attempted the paddle the evening before.


After setting up camp and having breakfast we spent the rest of the day just relaxing in the sun chatting with Philip as other kayakers arrived. The thing about this annual camp out is that you never know who is coming so it becomes a bit of a waiting game to see who might show up. Sheila and Neil landed at around 3:00pm followed by Yves and Patti of Go Kayak along with Michel closer to dinner time.


We gathered on the beach after dinner and watched the sun set through the clouds over Salt Spring Island like a fiery volcano. Sunsets at Arbutus Point are always spectacular which makes it one of our favorite places to camp.

Saturday morning we woke early to clear skies with brisk north winds. Yves and Patti joined us for a hike around the island while the others decided to relax back in camp. At Shell Beach we spotted a kayak heading towards the north end of the island so it looked like our little band of campers would be getting bigger later in the day. Arriving back at camp we spent the rest of the day soaking up the sun on the little shell beach as Rod arrived with word that Joanne and Doug were not far behind. Doug is a relatively new kayak camper (like first time) and it was fun to watch him unload his gear for a single overnight. It brought fond memories back to when Robyn and I arrived at the 2012 WCP camp out for our first time. Back then we brought everything including the kitchen sink and on this trip, so did Doug. LOL

Soon it was time to start preparing for the pot luck dinner and it has been our custom to provide a big plate of scallops and bacon. As usual there was tons of food to go around. Normally the camp out happens in April and we all huddle under Dan Millsip's big top tent to keep warm :-) but being June we had dinner on the beach instead. 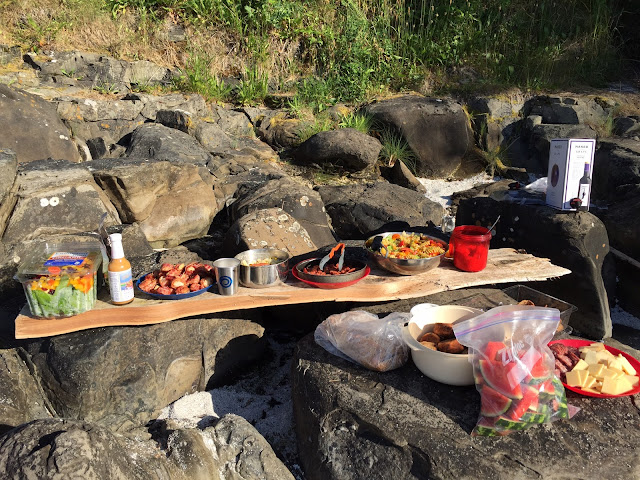 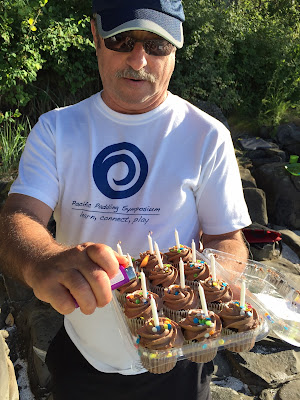 We also had a birthday to celebrate as Sheila turned 24 :-) so we all sang happy birthday to her and then had individual bite size chocolate cupcakes that Rod brought. Haaaaaapppy Birthday Sheila! 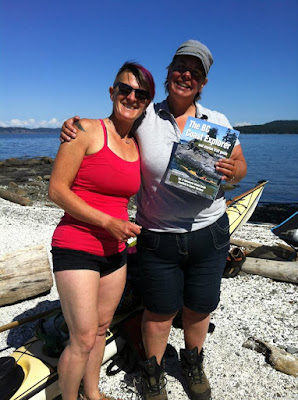 Joanne brought Sheila a birthday gift which every paddler should have. John Kimantas' "The BC Coast Explorer" Volume 2 which covers the south coast of Vancouver Island, from Bamfield to Comox Harbour including the West Coast Trail, the Juan de Fuca Trail, Greater Victoria, Saanich Peninsula, the Gulf Islands, Bellenas-Winchelsea Archipelago, Denman and Hornby Islands and finally Comox Harbour.


Once again Philip provided the entertainment for the evening showing off his Exped DreamWalker summer version sleeping bag. This isn't your ordinary sleeping bag as it can be morphed into a short jacket, vest or whatever you want it to be.

For those who have never heard the story before, he then told the tail of being almost eaten alive by a polar bear while trying to paddle through the northwest passage a number of years ago. Trapped inside his tent with another paddler, a polar bear picked him up by his foot only to be scared off when his companion fired off a blast from their shotgun through the tent. There are not too many people alive who can say that their foot was in a polar bear's mouth and who managed to live to tell about it. Philip has been there and done that!


After the sun set behind Salt Spring Island the group dispersed to their tents after a wonderful day. The weekend was ending and once again our group would be disbanding until next year.

Sunday morning we woke to the best day yet with only a very slight breeze coming from the north. Our plan was to be on the water around 10:00am so that we could catch the last of the ebb back towards Swartz Bay. After saying our goodbyes for another year, we joined Sheila and Neil for the paddle along the eastern shoreline to our put in location. It was another great West Coast Paddler camp out and we can't wait for the 2016 gathering. I think June is waaaaay better than April. Just sayin ;-) Robyn had a great suggestion to help me through trying to write blog updates which have become a bit of a chore lately. She said "Why don't you just dictate it to your iPad or iPhone and then cut and paste the transcript when you get home?" Holy cow .... what a great idea so I tried it this past weekend updating each day while the events of the day were fresh in my mind.

On Friday we decided to head to D'Arcy Island for a single overnight since we really didn't have any plans to start the weekend. Launching out of Amherst Beach in Sidney at 2:15pm we crossed over to Sidney Island to follow the coastline down to D'Arcy. Checking the tides and currents we knew that we would be paddling against the incoming 2.91 knot flood and against a slight breeze but it wasn't anything that we couldn't handle. D,Arcy Island is one of our favorite southern Gulf Islands camping locations as most of the time we've been there hardly anyone else has.  Arriving just after 5:30pm we were shocked to find that there wasn't anyone else and we had our choice of the campsites.  We chose site #2 which is our favorite for the afternoon sun. The island was all ours for the evening! After setting up camp we settled in for some "happy hour" appies followed by a great dinner of pork chops and salad with trail mix cookies for dessert.

Saturday morning we woke up to a beautiful sunny morning with a slight breeze coming from the southeast. Nothing starts the camping day off better than a hot cup of coffee so Robyn fired up our new Jetboil for the first time and it did a great job making our morning brew in about 3 1/2 minutes. Before breakfast we went for a walk to the point overlooking the bay of the campsite. From our vantage point we could see most of the southern end of the island which Robyn managed to capture on a panoramic setting.

Back at camp we had a great breakfast of bacon and poached eggs on cheese scones and then made our way up onto the grassy knoll to spend the rest of the day in the sun before heading home. A couple of times we seriously thought about staying another night but we had commitments that we needed to take care of on Sunday so our plan was to be on the water at 3:00pm.

I know that camping really shouldn't include social media or internet access but we posted a few Facebook teasers where we were and watched our Marine Traffic app to track the freighters making their way to and from Vancouver. Robyn then pointed out that the Cornelia Marie from Deadliest Catch was leaving Seattle and heading our way and soon would be passing between us and San Juan Island. Sure enough, just before we had to start packing, there she was steaming her way north towards Alaska for I think the King Salmon season.

On the water just after 3:00pm we caught the first of the flood current as we entered the pass between the two D'Arcy Islands. We decided to utilize flood current to paddle home but our route would be just a little different than the way we came. We crossed over to James Island with the goal of doing a little crab fishing and as we approached the sand bluffs on the south end we noticed a couple of whale sightseeing boats further north about a quarter-mile away. Could there be some sort of marine life viewing activity up there?

Suddenly we both heard the tell tale sign of a whale blowing and sure enough, straight ahead at less than 150 feet we saw two tall thin dorsal fins rise out of the water heading across our bows. It was one of those OH MY GOD moments as we frantically got our cameras ready and started filming and snapping pictures. It wasn't long before the whale boats also saw them and quickly started moving in our direction only to be disappointed as the Orca made a final blow and descended under the surface not to be seen again. For a few brief moments Robyn and I had the Orca all to ourselves and it was a very special time to share together.

After our Orca encounter we continued our way along James Island riding the rapidly increasing current as it took us past the James Island dock and through a mass of crab floats. Something caught my attention on the surface so I paddled towards it and came upon a female Dungeness crab that was on the surface swimming upside down. It was the darndest thing I have ever seen and I suspected that she was recently released from a crab trap but had air trapped inside her body that wouldn't allow her to sink. Double checking to make sure that it was a female and of legal size I scooped her up with my paddle blade and put her on my kayak deck to rest a bit. It didn't take long for her to scramble back into water and head back down to the bottom.

So .... it was obvious there were crab here so we went to work baiting (salmon scraps) our new folding crab snare that we got at Capital Iron for $15. After only 10 minutes on the bottom I gave it a quick tug to close the trap like a purse and hauled it up. YIKES .... really? Crabs? Yes a couple of legal Red Rock males that we decided to keep for dinner on Sunday night. We are both ecstatic how the crab trap worked and would have loved to spend a couple of hours in search of larger Dungeness crabs but we needed to be heading on our way back to Sidney.

We arrived back at our put in point at Amherst Beach just after 5:30pm after a wonderful and exciting paddle home. We were only away for 24 hours but it was worth every minute. 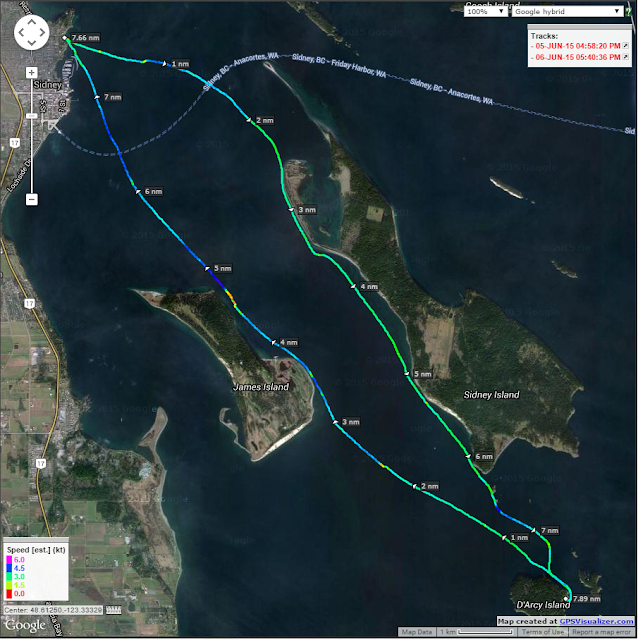 Posted by What's That Birders at 2:54 PM No comments: