The weekend of March 7th & 8th Robyn and I joined other members of the BC Marine Trails Network Board of Directors on a site assessment expedition into the Discovery Islands Group located northeast of Campbell River.

Leaving Victoria at 5:45am on Saturday morning we drove to the Quadra Island ferry terminal in Campbell River where we met up with Paul Grey, Reale Emond and Gene Gapsis to catch the 10:15am departure. Paul is the BCMTN Project Manager for the Discovery Islands Group and he had previously identified a number of sites that he wanted our group to take a closer look at.


Reale and Gene are the Stewardship Managers for the BCMTNA and they have been refining the Site Condition and Site Assessment Reports that the organization will be using in the future. It was also a hands-on training session on how to conduct site assessments which Robyn and I were looking forward to learning.

Our put-in location was at Moulds Bay just north of Heriot Bay which put us in close proximity to a number of the sites that Paul wanted to check on Quadra Island, Bold Island and a couple other small rocky islets.

The kayaking gods couldn't have given us a better weather forecast to deal with as there was no wind, no clouds, lots of sun and warm temperatures. This weekend would be our first overnight campout of the year and with clear skies and a full moon we wondered if there would be freezing temperatures overnight. Not to worry as we simply loaded everything we needed (like mexican blankets) into our Delta 15.5 Expeditions. We were only going for one night but we could have stayed out there for a couple of weeks with all the gear we took. LOL


Paul was our expedition leader for the day and couldn't stay with the group overnight so we checked out 3 locations before he had to leave. The first site was in a small bay called Shellaligan that was covered in oysters at low tide and had several areas that could be developed into campsites if need be.

Our next spot to check out was Bold Island, a small island that didn't look like much from the water and even looked like a tough place to land on the rocky beach at low tide. At first we thought maybe it would suit as a rest stop location but on further exploration we spotted an area that would make a great little campsite for 2 or 3 tents. I think Robyn and I have officially put "dibs" on this spot to do the site work should the BCMTN be granted this location.


The good thing about doing the assessments at low tide is that we got to visualize what the different landings might be like as the tide changes or in weather conditions.

Our next site to check out was a very small islet called Dunsterville Mini Islet which from a distance looked like a perfect place to set up camp however on closer inspection we soon found out that landing a kayak at high or low tide would be very challenging. Unfortunately this little islet will not make the list of sites that will be submitted for review.

As it was now getting late in the day we escorted Paul back to Moulds Bay as he was unable to finish the weekend with us. Reale, Gene, Robyn and I then headed to Breton Islands to set up camp for the evening. Breton Islands campsite is located on crown land and although it looks like it is heavily used, we were the only ones here today.


Since the weather forecast was for no rain we set up our tents in between the logs on the beach and watched the sun slowly sink over Vancouver Island.


Before we got to the task of making dinner, Robyn and I took the opportunity to go find a geocache that is on the NE side of the island. The cache in question had only been found a few times since being placed there several years ago and it wasn't long before we located it. The view from the cache site looking northeast deep into the Discovery Islands Group was stunning. Tomorrow we would head that direction and do more site assessments but first it was time to head back to camp and make dinner.


When we landed at the campsite we noticed that a small fire just above the high water line was still smoldering from recent guests so we burned off the partially burned wood as darkness surrounded us. Being the beginning of March we were prepared for a possible cold night but just as the marine forecast predicted it was almost like a midsummer night in paradise. The full moon started to show itself above the tree line of the island as we headed to bed and set our alarms for 6:00am. The next day was going to be a long one and we needed to be on the water at first light to put in the miles.

OMG!!! The 6am alarm clock woke us up and it was still dark as we crawled out of tents and started the process of loading up the kayaks. With daylight savings clicking in overnight it actually was 5am but we had work to do. Breakfast and coffee was made using our headlamps as very slowly it started to get light. Just after 7am we were on the water and heading towards Read Island to check out some sites that Paul had asked us to assess.


There are advantages to getting up early and being on the water. Paddling as the sun rises does something to the soul and it takes all your troubles and worries away as the new day approaches. Back to work :-)  Reaching Read Island we explored the beautiful rugged coastline checking every small bay or cove for potential sites.

We came across a small pebble beach located deep inside a cove which is called Read Point East and after landing we explored the upland for possible places that tents could be set up. This end of Read Island is a Provincial Park but at some time in history there must have been a homestead here as we found the remnants of an old garden. This would make a great campsite location as there is room for several tents in a couple of areas.

Our next site was one that Paul wanted us to check on and it was a possible location that we were considering as using as our base camp the night before. Located in a very long cove the site is designated Lake Bay as a small creek flows from Rosen Lake in the park on Read Island. Entering the cove the view deep inside is wonderful with steep rocky walls all way to the landing area of small rocks. Once on land we soon realized that beyond the piled up driftwood there was a pretty substantial marshland hidden from view and almost nowhere to put up a tent. Maybe it was a good thing that we didn't paddle here the evening before as finding a location to put our tents would have been a challenge.


While we were completing the site assessment at Lake Bay, another paddler entered the cove and came ashore. It was Al Dunham who lives in Campbell River and had been in contact with Reale the evening before while at our Breton Islands campsite. Al had gotten up early, took the ferry from Campbell River, launched from Rebbeca Spit Marine Park near Heriot Bay and tracked us down here.

Our next couple of sites to check out were 4nm north of Lake Bay and so the five of us headed off towards Hill Island which was about the half way point. The sun slowly started to burn through the marine layer revealing another amazing day with hardly a breath of wind. Early March on the west coast and it felt more like early summer.


While Gene, Reale and Al started to check out a site at Whale Passage, Robyn and I headed over to Frederic Point to check out a potential site there. We found a location to land in between a field of large boulders and made our way up to the high water line. Looking back from where we came we could see the snow cap tips of the Vancouver Island Ranges in the distance.


The beauty of venturing deeper into Discovery Islands is that the sites that we started to assess were in many cases totally untouched. Such was the case at Frederic Point as we saw no evidence of previous camping at this location. With care, a couple of tent sites could be established at this location in the future. 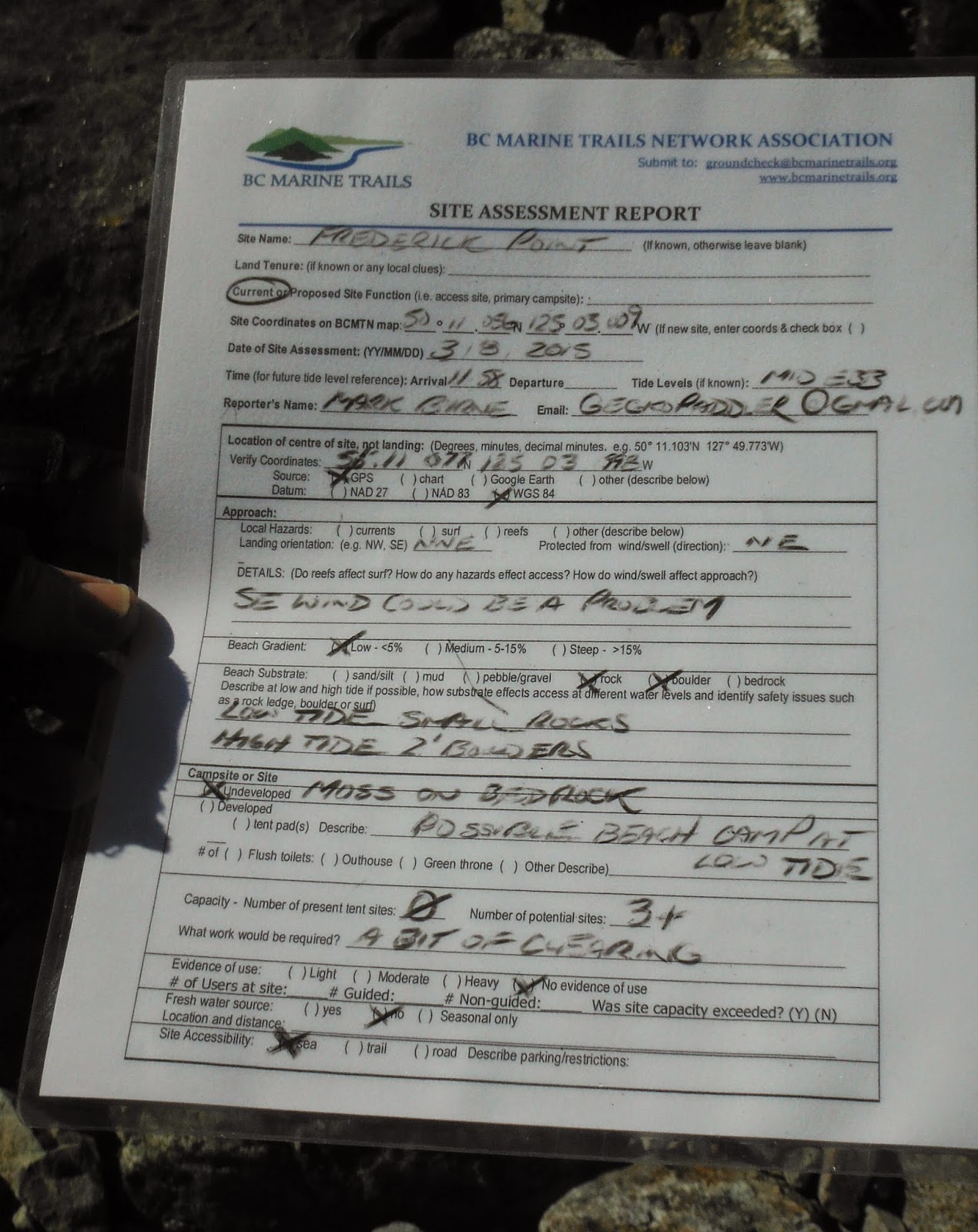 One of the purposes of this trip was to check out potential BC Marine Trails sites in the Discovery Islands Group but it was also an opportunity to use the recently developed laminated Site Assessment Report.

We simply used the provided grease pencil to complete the report and took a few photographs (Robyn's idea) of it to save the data. I then wiped clean the laminated report for use at another site later in the day.

After completing the Frederic Point assessment, Robyn and I joined the others at the Whale Passage site just a few hundred meters east. The Whale Passage site has been used in the past as a paddle in campsite and it offers fabulous views and a clearing beneath the trees just above the landing area for tents. This would be our lunch stop before pressing on to a couple more sites before heading back towards Moulds Bay.

Rounding the point at Whale Bay the view up towards Bute Inlet was stunning. The area has a feeling of being so remote and would be a wonderful place to do a multi day trip in the future. Another bucket list destination.


The next site we visited was called Penn Islands Central. At first glance it looked like landing might be difficult due to a massive oyster bed in the small bay that was exposed during the receding tide.

But like most of the sites that we visited, high water will allow landing on a beach consisting of small rocks and bedrock.

On one side of the small bay we explored the mossy bluffs and identified a number of places that would be suitable for a few tents.


On the other side of the bay our exploration efforts located the remnants of what looks like a make shift camp established to harvest the oysters. It obviously hasn't been used for quite some time but could be easily be cleaned up to become a good site.

Our last site was at Penn Islands Southwest and once again, medium sized boulders at low tide to land on. From the water it doesn't look like much but once on the beach the possibilities reveal themselves for camping above the high water line and even up high on the bluffs nearby.

In order for Robyn and I to make it back to Victoria before midnight we needed to be heading towards Moulds Bay by no later than 2:00pm. With the paddle back to the put in, unloading of the kayaks, drive to the Quadra Island ferry (which we missed the 6pm), we finally made it home just before 11pm. The whole way back in the car we talked about how magical the experience to paddle the area was and the planning process has begun on doing an extended multi day trip into the Discovery Islands Group in 2016. 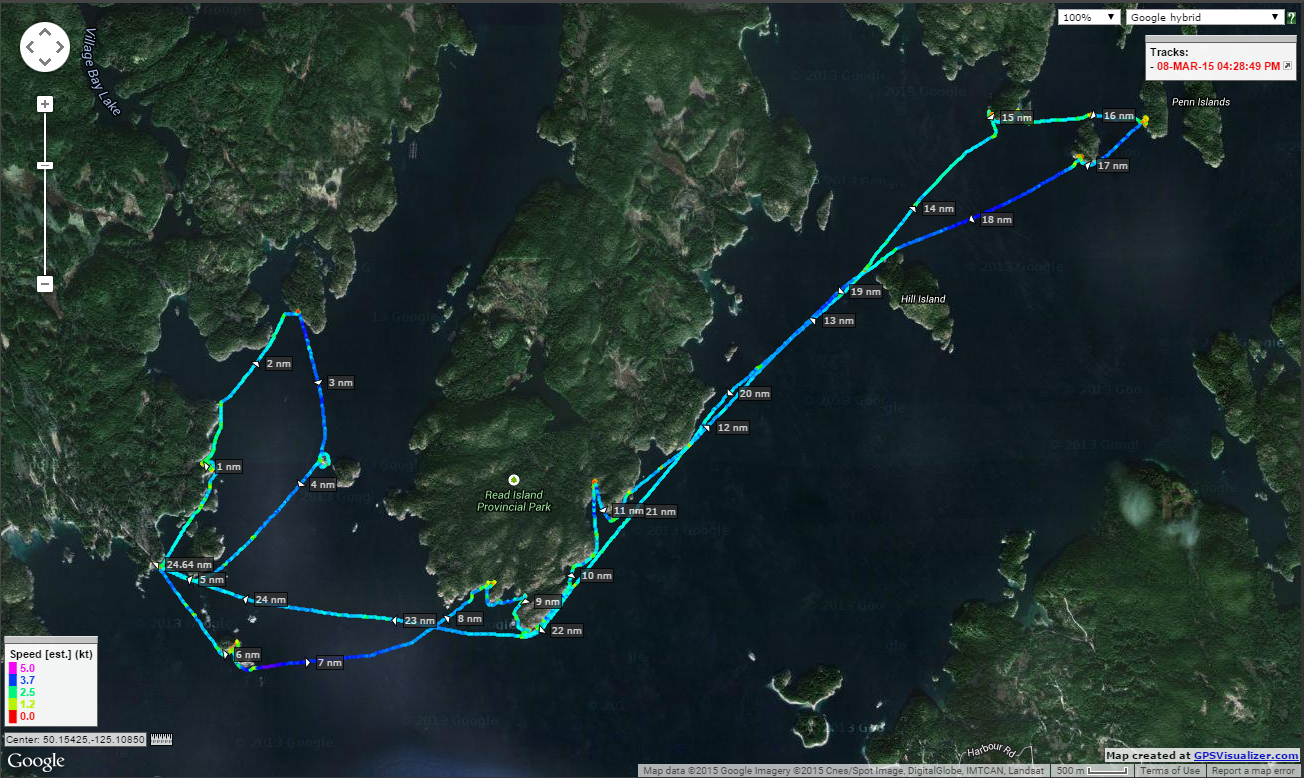