Just catching up on some blog posts that have been sitting in a pile on my desk. This has been happening too much with my (our) volunteering duties the past couple of months. :-)

Anyway, on Sunday February 22nd, Robyn and I managed to finally paddle at Port Renfrew for the first time and we were treated to a spectacular day of weather, sea conditions, rock gardening, BCMTN Site Condition Reporting and of course great fellowship.

Only 2 hours from home we met up with Reale, Janice and Beverely at the Gordon River Pacheedaht First Nation campground for a day of exploring along the north side of the inlet. Up to this point we had only heard of how great the rock gardening and sea arches are in the area.

As you can see in the picture above, not a cloud in the sky, no wind and just enough swell that would make our rock gardening interesting. Leaving the beach at 11:00am the plan was to follow the shoreline up to Thrasher Cove where we would have lunch before heading back.


The tide was pretty low on the way out and some of the arches didn't have enough water for us to paddle through but never the less we explored almost every nook and cranny.


We had some great rides through the surge channels and it was interesting to see how a calm channel would suddenly explode into turbulent foaming turquoise sea underneath our kayaks. It was a great place to use a variety of paddle strokes to navigate through some of the tide spaces between islets.


By the way, an update on my Jackson Kayak Happy Seat. This was the first real test of it in dynamic conditions and I can't say enough about how it helped the feel and control of my kayak. The additional thigh bracing that it provides allowed me to effectively use my legs to pull the kayak around rocks and through some tight spots. If fact, on Monday I was wondering why my core was so sore and then I realized that I was using core muscles more than I have in the past. Yes ... I am sold on using it in my play boat!

After a couple of hours of play we arrived at Thrasher Cove which is on West Coast Trail route of the Pacific Rim National Park Reserve. The 75 km West Coast Trail is part of the ancient paths and paddling routes used for trade and travel by First Nations. 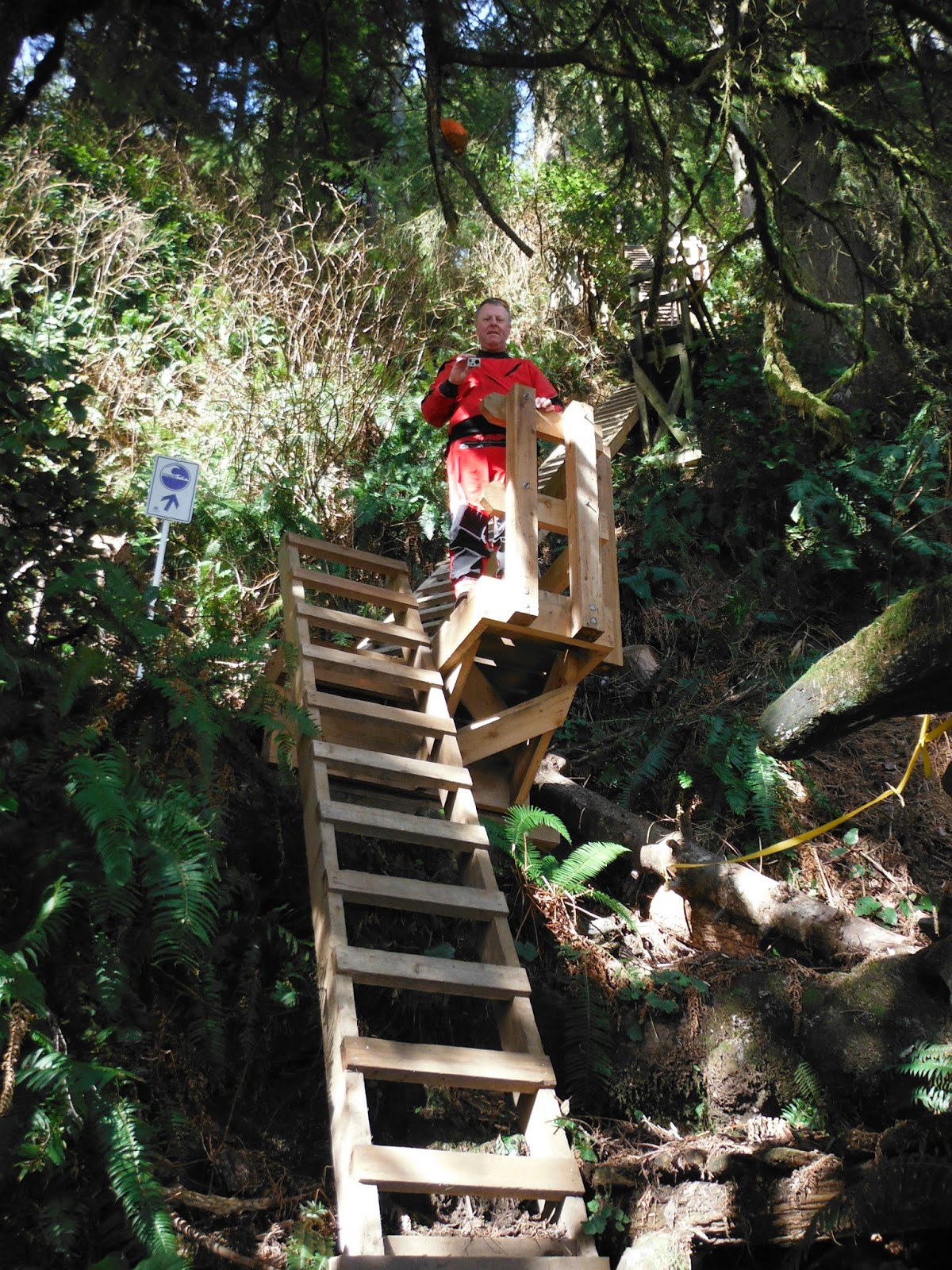 The long, very long stairway up to the West Coast Trail. The sign next to me indicates the tsunami evacuation route. Tough to haul our kayaks up in an emergency. LOL

The only thing that didn't happen on this paddle was doing a little surfing. I was hoping that maybe there would be some action when we arrived back at the beach but there wasn't any waves being generated. Maybe next time. Oh yeah .... and this amazing weather is in February! Looks to be an early spring for us on the west coast. ;-) 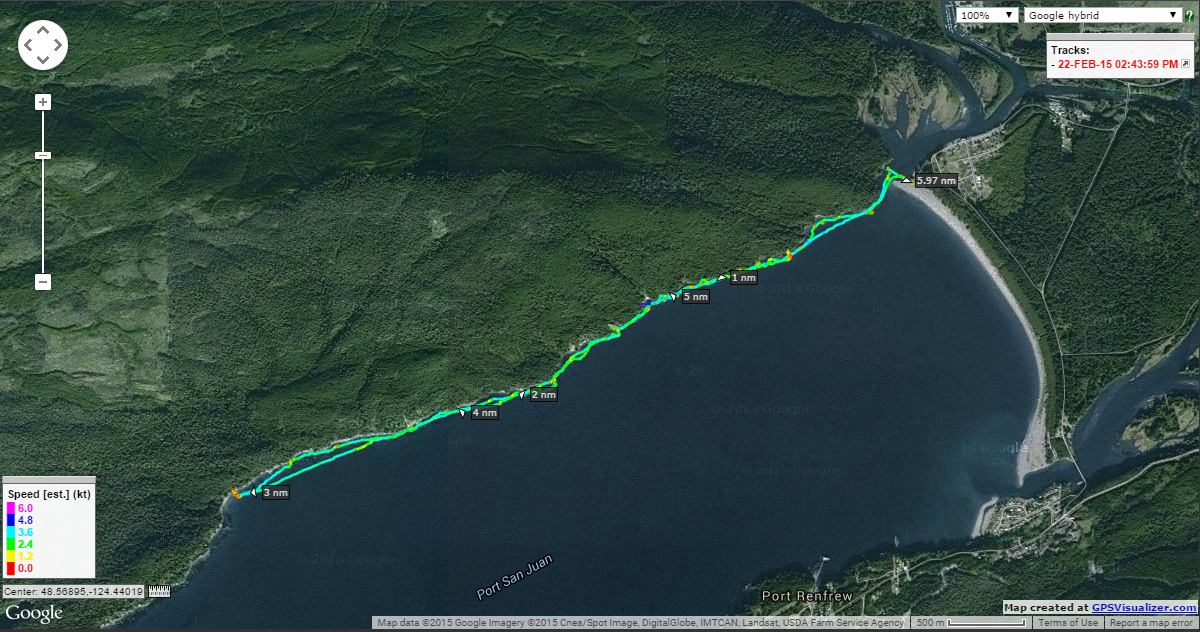 Last Saturday (February 21st) Robyn and I went for an early spring paddle from Gyro Park in Cadboro Bay to Cattle Point. Nothing but sunshine and 13C temperatures to greet us as we explored the coastline while Robyn worked on some of her maneuvering skills.

For me it was an opportunity to try a Jackson Kayak's Happy Seat that I installed in my cockpit earlier in the day. Recently I have been having some hip and knee issues while paddling my P&H Delphin on long flat water paddles and I saw this device in kayak at our local club (South Island Sea Kayaking Association) meeting last month. Since then I have been improvising by using my blow up paddle float partially inflated under my thighs to allow me to relax my legs a bit. It made a huge difference in the pool and on our last paddle over to Discovery Island, so I decided to get the real thing.


The Jackson Kayak website describes this device best. The Happy Seat is an inflatable bladder that goes under your legs just in front of your existing seat. It has two purposes. 1. It gives you more control in the boat. 2. It makes your legs more comfortable, taking some of the pressure off of your knees, hips, and butt. The Happy Seat comes with a cord to attach the front of it to your floor support, and the back end attaches by Velcro straps around your seat.  You should make sure it doesn't impede exit from your boat in case of emergency.

Installation was quick and easy and since I don't have a front tie down post like a whitewater boat might have I just used a spare GoPro adhesive mount that I stuck to the floor of my cockpit. Once on the water I inflated the bladder with the nice long air line and made sure that I could exit the kayak very easily. One of the features that I love about the Happy Seat is that when you drop one knee the air transfers from one bladder side to the other allowing the lower knee to be removed from under the cockpit thigh braces.

As we paddled towards Cattle Point I spotted someone in a sheltered cove taking pictures of what I thought was wildlife but soon figured out that it was our paddling friend Gary Jacek. Gary was out on a bike ride and he managed to spot us from Beach Drive as we paddled through the Royal Victoria Yacht Club just after leaving the beach. 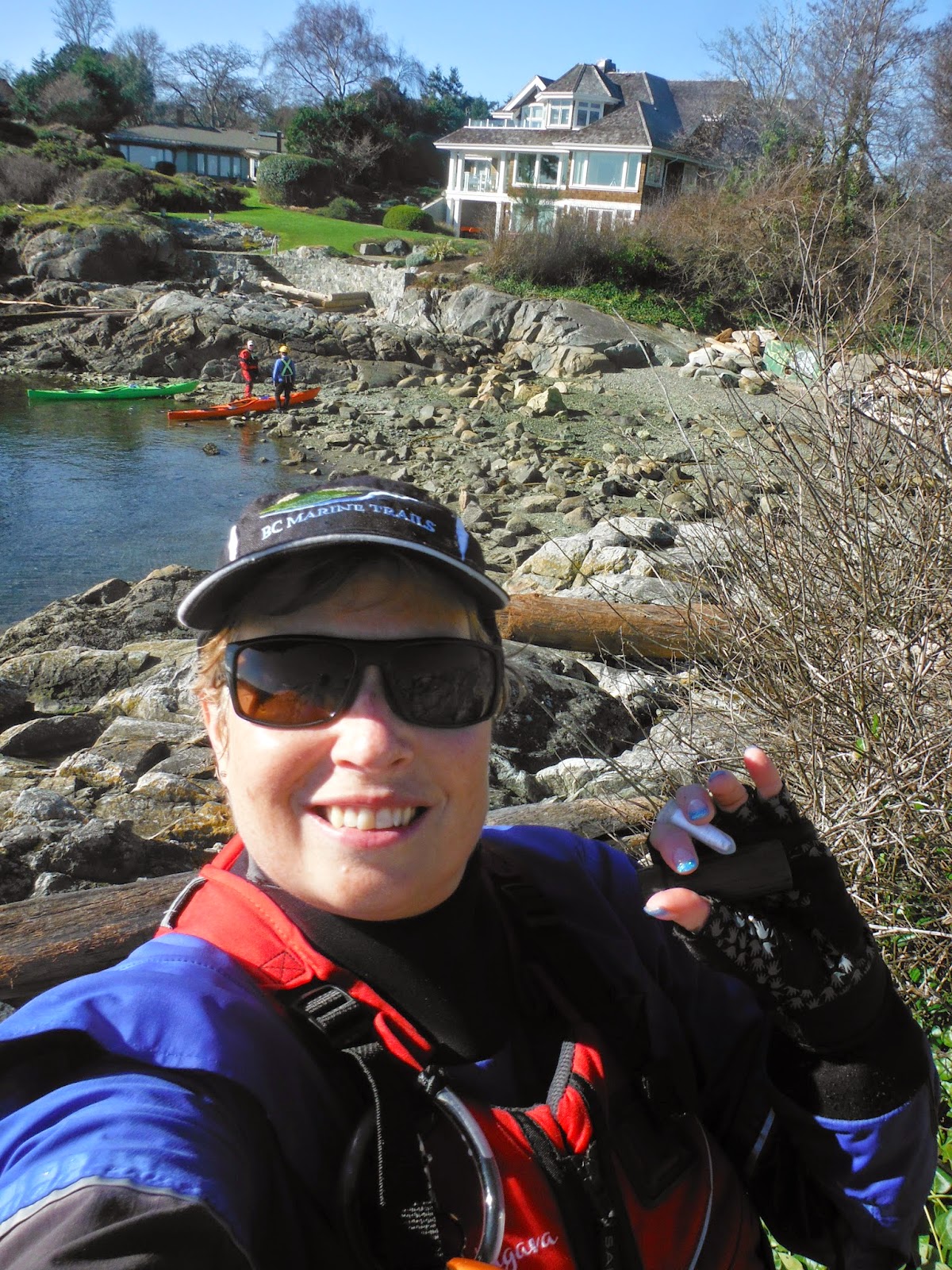 We landed our kayaks in the little cove to talk with Gary for a while and Robyn noticed on her GPS that there was a Geocache very close by. So off she went to make the find before we continued on our way. That's a pretty good selfie of Robyn with our kayaks, Gary and myself in the background. :-)

While the rest of Canada is frozen in winter at this time of year we sure have it tough on the west coast. They say that April showers bring May flowers but for us it's more like January's showers (no snow) bring February's flowers. Yes.... spring has arrived in Victoria! 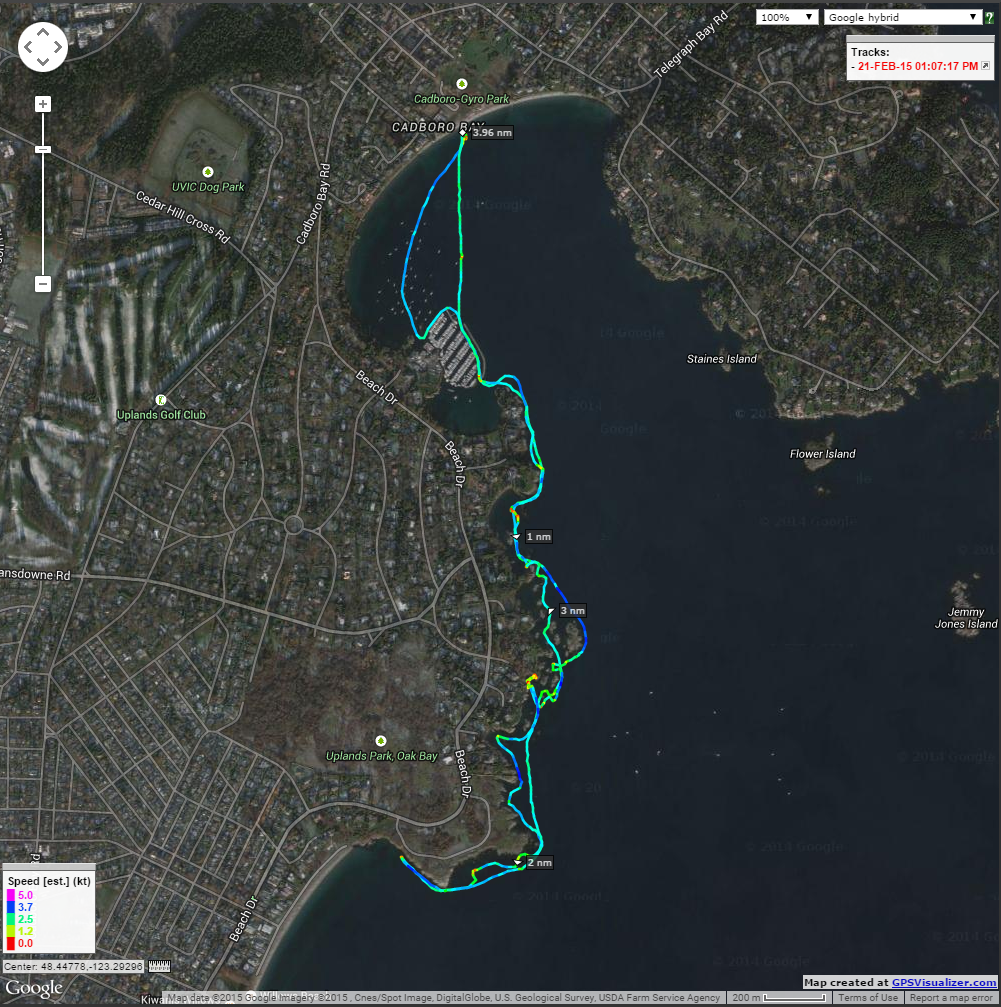 What did we do on Valentine's Day? We went Geocaching by kayak over to Discovery Island to look for a new cache and to place our (RVTraveller's) latest cache. It was also a good opportunity to do some cache maintenance as well while we were there.


It was an awesome day to head across Baynes Channel and paddle through the Chatham Islands on our way to the BC Parks Marine Provincial Park at Rudlin Bay on Discovery Island. Slightly overcast skies with no wind and a slack tide on the way over made it a nice lazy paddle as we kept our eyes open for the lone wolf that has taken up residence on Discovery. Ready with my GoPro Hero 2, I started to video as we passed the lighthouse in hopes that we would catch a glimpse of her.


We made a quick stop before reaching Rudlin Bay to locate a geocache that was placed only a few weeks ago. Lots of places where the cache could be hidden but with the GPS we found it fairly easily.


We forgot to bring a pen or pencil with us to log the cache and the cache container didn't have one in it so we decided to simply take our selfie and use the picture as evidence that we found the cache.

And then it was time to get down to business to find a location to hide our geocache called Plaque Discovery (GC5MTAA). Although not really difficult, the cache takes you to a couple of plaques dedicated in memory of Captain E.G. Beaumont who donated this beautiful property to the Province of BC.


After finding a nice hidey hole for Plaques Discovery we headed off to find a cache that Robyn adopted a few months back and do a little cache maintenance. I still had my GoPro running in case we came across the wolf but today we didn't get to see her. We did however find lots of evidence of her on the trail out to Commodore Point in the form of scat and where she recently clawed away the moss on the trail.

Can you see it? We came across this Bushnell HD Trail Cam that has obviously been set up to capture images of the wolf when she passes by it. We got a little closer in hopes that our selfie would be seen by whoever owns the camera. :-)


Originally placed in 2006 by another Geocacher, Robyn adopted the cache when the owner was no longer able to take care of it. We are so glad that we could help keep this cache active after 9 years since it was hidden on the island.


After a quick bite to eat we started to head back towards Cadboro Bay but we came across something on the beach staring at us. Was it the wolf? No it was a totem pole!

I'm not sure if this is a First Nations carving but it might be since it is on the north side of Discovery Island which is part of Discovery Island Indian Reserve 3, under the control of the Songhees First Nation. In any case we respected First Nation's law that prohibits landing on the beach. From our vantage point in our kayaks we were able to get close enough to get a good view of the totem.


We headed back through the "slough" where the ebb current was flowing. It was a chance for Robyn to work on her ferrying skills. This is the place that Robyn and I first took a currents course with Yves of Go Kayak 3 years ago and we now call it Yves' Slough whenever we come through here.

The paddle back across Baynes Channel was just a little bit of a workout in the ebb to finish off another wonderful visit to Discovery Island. 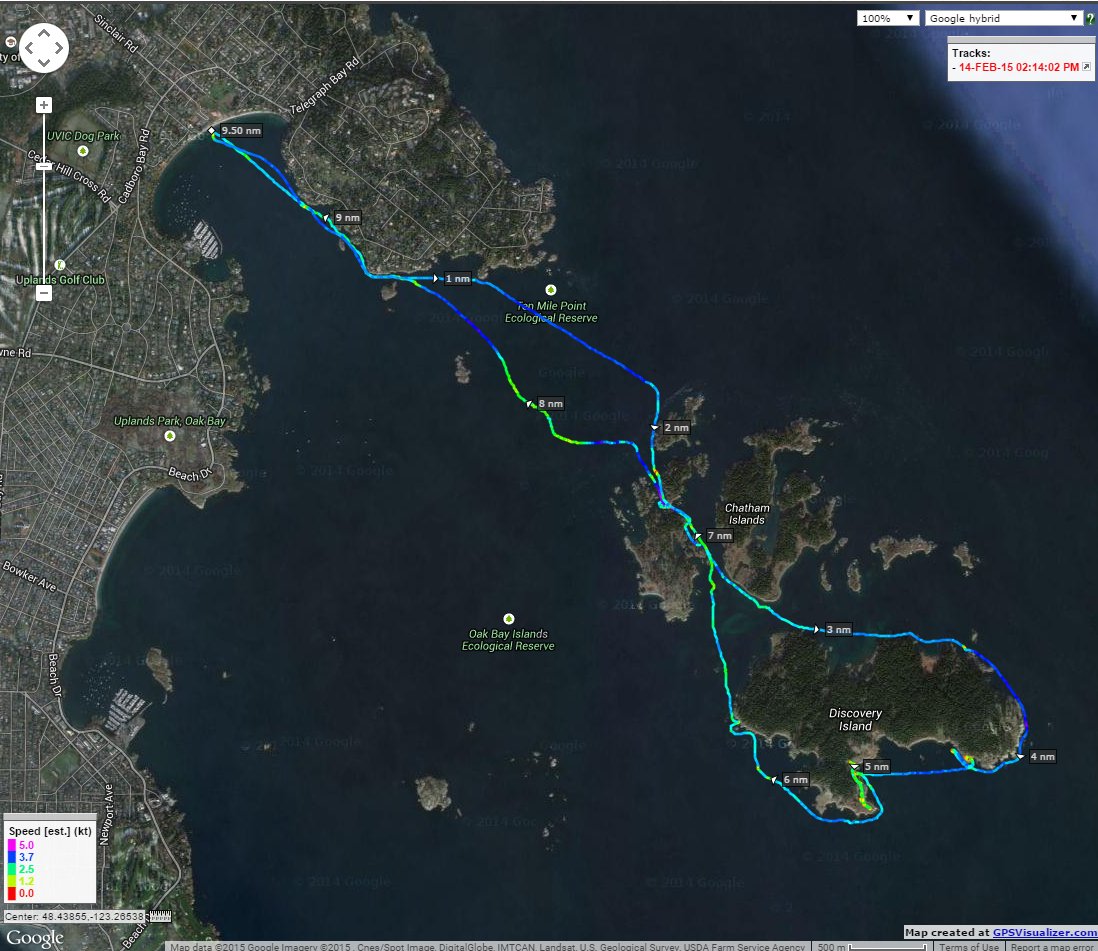 Ever since we got back from our Paddle Canada Level 3 / 2 course in the fall Robyn has been working very hard to get ready for her Level 3 Assessment in April. In fact her skills advancement has been amazing to watch in the pool over the winter and now it's time to transfer those skills to the ocean.

A couple weeks ago Robyn asked me what she should work on and I said "Let's work on paddle strokes". So off we went to Cadboro Bay just to work on edging and paddle strokes with a focus on core rotation. For this paddle I put the GoPro on her kayak so we could analyse the session later at home. This is just a sample of her paddling for the day. :-)

After 3 plus years of writing about our kayak adventures I have to admit that I kind of lost the "mojo" to hammer away on the keyboard after a long day or weekend on the water. Inspired by The Hurricane Riders' Rowan Gloag and Marty Perry I decided to try and tell the story of our latest adventure out to East Sooke by creating this video. Enjoy! 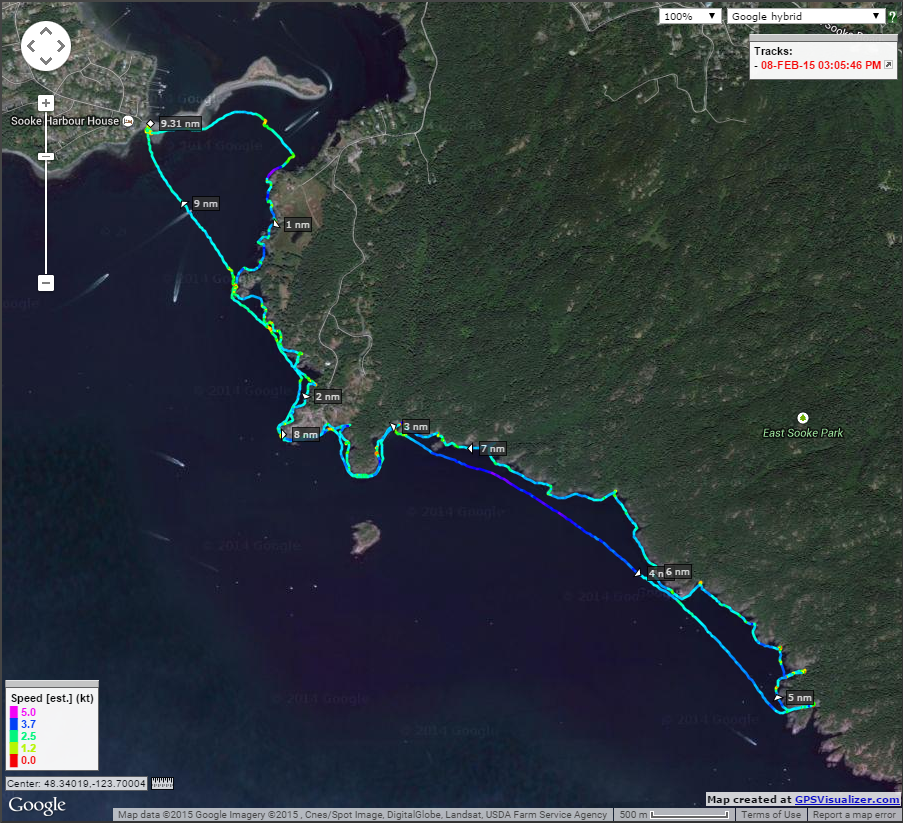