We couldn't think of a better way to start the new year off than heading out with 28 other eager paddlers for a SISKA Energizer  around Discovery Island today. Waking up to a chilly (for Victoria) -3C we made sure we were well prepared for the cold with several layers under our dry suits today.

Our group leader for the paddle was Tom Hukari and putting together plan with this many paddlers is a tough task but Tom being the SISKA On Water Clinics and Course Coordinator had all the bases covered. Our put in location was at Gyro Park in Cadboro Bay and although cool, the weather conditions were perfect for making the run across Baynes Channel with no wind and minimal currents.


After the group was all on the water and the paddle leader checked with his assistants by VHF radio we made our way out of Cadboro Bay towards 10 Mile Point before crossing Baynes Channel. From our vantage point at 10 Mile, we could see a bit of tide rip off the northern end of Strongtide Island. I soon realized that because of the calm conditions the wave (rip) height was magnified by the shimmering effect of a mirage on the surface of the water. The same effect also made some of the San Juan Islands look like they were floating in the air.

As expected the crossing of Baynes Channel required a bit of ferrying to maintain our track due to the decreasing ebb flow. Because the experience level of the paddlers varied, our large group broke up into a couple of smaller groups during the crossing but were each escorted by one of Tom’s team. This is where the radio communication really came in to play and I was impressed with how Tom’s team worked together. Once we arrived at Strongtide Island we re-established the larger group of 30 paddlers before starting to explore some of the smaller islets, coves and harbours of the Chatham Islands on our way to Discovery Island.

Mike Jackson who probably knows this chain of islands the best in SISKA was our tour guide for the paddle and his knowledge of the area was amazing. One of his favourites spots to visit is in Puget Cove located within the main Chatham Island. Leading us past a small bottle neck we entered a small basin where Mike proudly showed us a few patches of Prickly Pear Cactus just above the water line on a little islet (6 km mark on track below). Although Mike didn't know what the correct name of the islet was he liked to call it Prickly Pear Island. Quite fitting I think.

We then headed down the east side of Chatham to Discovery Island, past the unmanned lighthouse and into Rudlin Bay which is home to the Discovery Island Marine Park. Here the group stopped for lunch and kept a close eye out for the solitary wolf that now resides on the island. I took the opportunity to wander up one of the trails that follows the shoreline of the bay looking for any signs of the wolf. Unfortunately the wolf was not to be seen today but Mike explained that a few weeks back on one of his paddles the wolf followed him along the shoreline all the way around Commodore Point. He even has some great pictures of it on his Facebook page to prove it!


After lunch we paddled around Commodore Point keeping keen eyes out for anything moving (wolf) on the beach as we entered Plummer Passage riding a gentle flood current along the way. The group reassembled into one main pod before heading back across Baynes Channel towards Cadboro Bay. This time we would experience the increasing flood currents so we ferried our way towards Jemmy Jones. Although the current in the main part of the channel was really not very noticeable at all, the current rounding the south west tip of Jemmy Jones was quite different the closer we got to the island.


Most of the group including Robyn stayed a little further out from the island and experienced less current (maybe 1 knot) but I chose to paddle up the back eddy and enter the main current right at the tip of the island. Being only a few feet from the rocks it took all that I had to paddle around the point of the island. Just for a few seconds which probably seemed like minutes to me, I felt that there was no way I was going to make it around. How fast was the current running on the course I took? Maybe 3 or more knots but once again the power of the ocean and how it interacts with the geology was being demonstrated to the group in very calm conditions.

Once the group entered the shelter waters of Cadboro Bay we spread out a little bit and made our way back to our put in location where a few of the paddlers took the opportunity to get that first ocean roll of the new year in. Brrrrrrrr!!!! Me ….. Heck no!! I was nice and warm in my dry suit and fuzzy yak hat!!

Just a note to our readers …. We won’t be on the water for a couple of weeks as we are heading south to Disney World for some fun in the sun. You can always check to see what we are up to on our Facebook pages as we will be posting pictures daily from the Magic Kingdom. 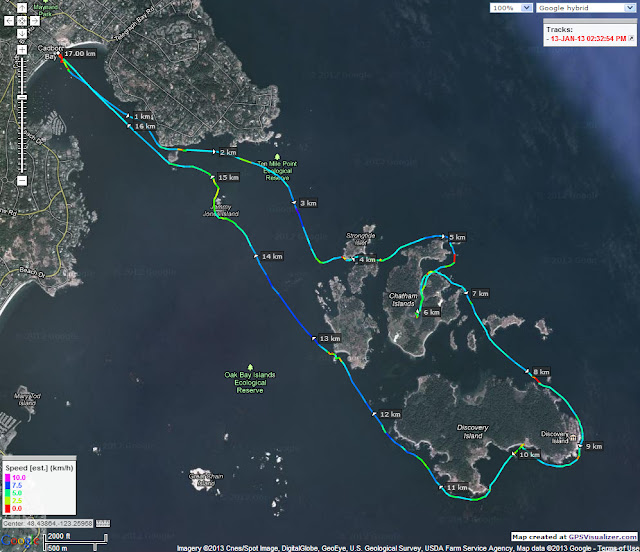