It was a perfect way to send out 2014, paddling with friends in perfect conditions to play in Gabriola Passage. No wind, lots of sun and even with the temperature hovering around 0C it didn't matter. December on the west coast can be amazing and it today was one of those days.

We met up with Reale, Joanne, Dave, Walter, Gordon, Susie and Gerhardt at the Cedar BC boat launch for a 10:30am departure with the plan to head to Gabriola Passage to play on a small standing wave as the ebb developed. Although I have paddled through the pass this was Robyn's first visit and the first for both of us while the current was running. Usually my pre-trip planning is pretty spot on but today I forgot my camera and my radio so Robyn stepped in to take the photos. Luckily I did have my GoPro mounted on my kayak though.


With a high tide we headed for the tombolo that connects Mudge and Link Islands with the hope that there would be enough water for us to paddle across it instead of portaging. We have done that before and it isn't fun especially if your kayak is loaded. As luck would have it there was water covering the tombolo and we just about made it across but had to get out of our kayaks to push them a few feet across the top. Another couple inches of water and it would have been perfect.

We arrived at Gabriola Passage just as the ebb was beginning and so we landed on a exposed rocky outcropping at Cordero Point on Valdes Island to warm up and have a bite to eat before heading to the main feature where the wave would form.

It was just a short paddle around the corner from our lunch stop where the wave would form but with the sun being so low on the horizon it meant that it was pretty chilly in the shade of the trees. Pogies were a definite must even though I prefer not to wear mine when in dynamic water. I'm glad I did today though.


Today the maximum ebb was forecasted to be around 5 knots and Robyn climbed on the rocks to take some pictures right at the wave. Having never been here before I surveyed what the feature was doing not just at the wave but also downstream. Because the passage is so narrow at this point it almost has the illusion of being a swift flowing river. Only looking past the feature towards the Flat Top Islands confirms that the flow is coming from the Salish Sea.

Thankfully I had my GoPro and managed to capture a few of my rides. I like this one because I really focused on relaxing and tried to be as smooth as I could be while edging the kayak from side to side.


2014 was an exciting year for Robyn and I even though we didn't paddle as much as the past couple of years. We did however manage to go on our first extended trip to the Bunsby's, complete our Paddle Canada Level 2 & 3 certifications and once again met new friends and paddled with many that have been along on our kayaking journey since the beginning. Thanks to all of you for stopping by and reading about our adventures. Happy New Year!!!

Getting Back At It!

Belated Merry Christmas! Where did December go? The last thing we sort of remember it was the middle of November and we were just starting to ramp up things while volunteering with CFAX Santa's Anonymous. Although we didn't find the time to get on the water outdoors we did manage to cram in a few evening pool sessions to work on rescue skills. But it's not the same as being at sea :-)

After the Christmas celebrations were over we headed up to Living Forest R.V. Park in Nanaimo where we are spending the rest of 2014 in the comforts of our trailer. We have a couple of paddles planned while we are here so we thought that we should spend some time on the water today to limber up the dormant muscles.


In all the times we have paddled here we have never been able to complete the loop of the Nanaimo River estuary either because the tides weren't right or the there hasn't been enough water in the river. Today was perfect with a high tide and plenty of water flowing down the river. Just to make sure, we headed up the river and made our way into the smaller channel that runs through the middle of the estuary and simply let the flow carry us out towards open water.


Leaving the river we made our way over to Jack Point to take a look at the modern petroglyphs carved in the sandstone that can be seen from the water. You can actually see the effects of erosion from the sea water on one of them at high tide.

Crossing back over towards the campground we made our way through the log booms and into the Chase River Estuary. We have never been able to paddle into the Chase River system before due to low water levels but this time we managed to paddle right up to the pump house. (Note: a few hours after we go back to our campsite, low tide revealed nothing but mud from the log booms all the way to the put-in except for a narrow river leading the way out to the open sea. Our track photo below shows the mud plain that is visible at low tide)

Entering the Chase River there was a bit of a current flowing under the train trestle that we had to paddle through but that would just make the return trip fun :-). Entering the estuary we found a number of vehicle relics that had been dumped here many decades ago. Robyn also commented that there was a Geocache nearby and sure enough when we got back to camp we found out that it was an Earthcache. Now all we had to do was answer the questions and submit a photo of ourselves .... which another geocacher managed to capture for us in her photo. Now that's a photobomb!


The year isn't over for us in terms of paddling. We are hooking up with some of the Nanaimo Paddlers on Dec, 30th and Jan. 1st. It sure feels great to be back on the water! 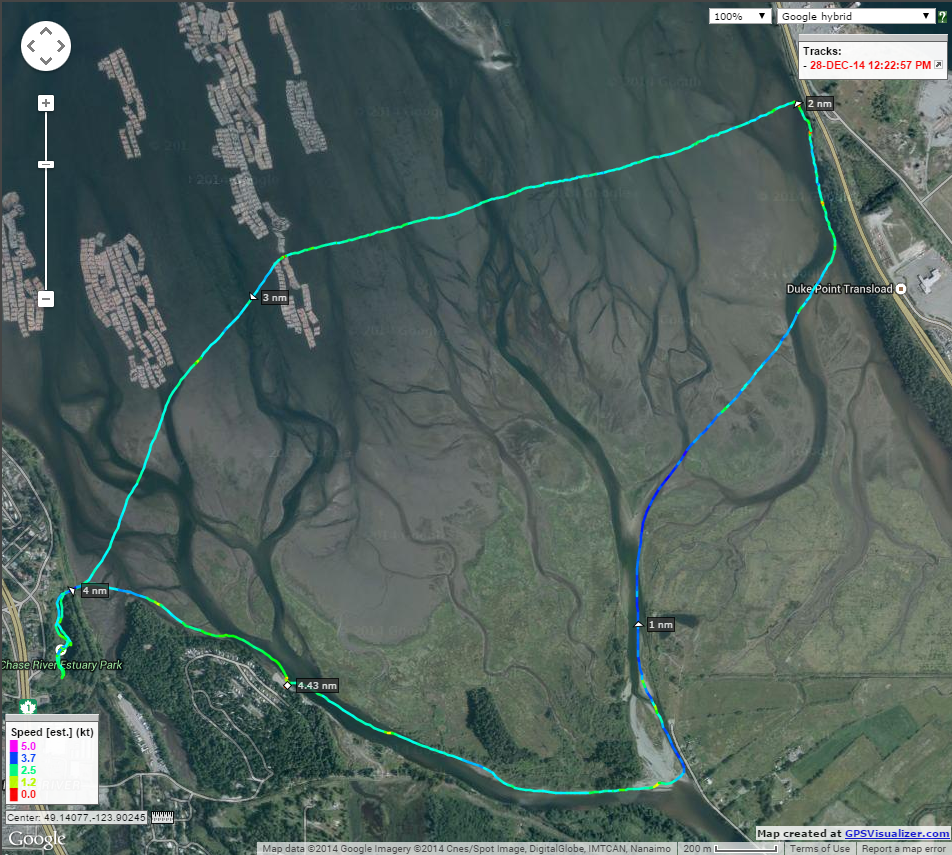 Posted by What's That Birders at 6:31 PM No comments: